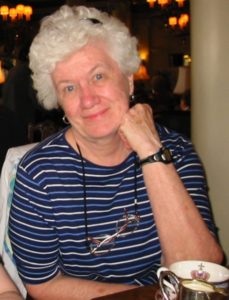 Hudson – Elizabeth (Clark) McCarthy, known as “Betty Ann” to her many friends, born Jan. 22, 1932 in Hudson, passed away Aug. 11, 2018 at age 86 after a period of declining health. Elizabeth was the loving wife of Charles, and they would have celebrated their 66th wedding anniversary Aug. 16.

She graduated with honors from Emmanuel College with a degree in Biology and had even considered attending medical school, but decided to devote her life to raising a family. She lived most of her life in Hudson, but briefly lived in Arizona (while Charles was in the army) and in California, where she worked in a research lab before the birth of her first two sons. They returned to Hudson permanently in 1961 to build a home and raise their children.

Elizabeth had a beautiful singing voice and loved playing the piano, reading, doing crossword puzzles, watching mystery series, especially British miniseries, and was a trivia mastermind. Elizabeth and Charles were both avid skiers and volunteered as ski patrol officers at the Ward Hill and Blue Hills Ski areas for many years. She and Charles also took up running and, in their 50s, spent many years participating in races in Bermuda.

While primarily a stay-at-home Mom, she tried her hand as a real estate agent when her kids were older, and eventually set up her own successful business as an indexer, compiling indexes for many of the large publishing houses for medical books and other complex texts. With her voracious appetite for reading, this allowed her to read books she never would have read otherwise.

She, with her daughter Mary, attended many annual conferences of the American Society of Indexers, which brought her to places she may not have visited otherwise. A visit of particular note was the conference in Albuquerque, N.M., where Elizabeth and Mary were met by her son, Kevin. Together, they drove to Roswell, N.M. on a road trip to see the legendary site of the alien ship crash. She was always up for such adventures and had a wonderful sense of humor.

Elizabeth and Charles, along with Patsy and her husband Paul, took their dream vacation together to visit Ireland. Elizabeth and Charles also had a close knit group of friends, affectionately called “The Biology Club,” who met every month at each other’s homes for over 50 years and spent many vacations together.

Per her wishes, there will be no calling hours. A Mass of Christian Burial will be celebrated Saturday, Aug. 18, at 11 a.m., at Saint Michael Parish, 21 Manning St., Hudson, followed by a procession to Saint Michael Cemetery for interment.

She was an active member of St. Michael’s Church all her life until her illness. Instead of flowers, donations in Elizabeth’s memory to St. Michael’s Parish would be welcome and appreciated.