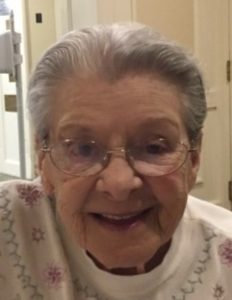 Sudbury – Ruth Ann (Tavares) Madden, 92 of Sudbury, formerly of Hudson, passed away peacefully Sept. 17, 2018 at Wingate of Sudbury, after a period of declining health.

Ruth was born Nov. 8, 1925 in Hudson, daughter of the late Ralph and Ruth (Lawson) Tavares. Ruth graduated from Hudson High School and shortly after married the love of her life, Francis L. Madden.

Ruth was widowed at an early age, and devoted her life to raising and supporting her four young boys on her own; spending several years serving tables at Sharon’s Diner on Rawlins Street in Marlborough and later working as a bead blaster polishing figurines at Lance Corp in Hudson, before she eventually retired. In her later years she enjoyed spending time with family.

Ruth is survived by her four sons, Francis L. Madden of Marlborough, Peter M. Madden and his wife Valerie of Vernon, Conn., Brian P. Madden and his wife Cynthia of North Conway, N.H. and Thomas J. Madden; a sister, Eleanor Nunes and her husband Oliver of Hudson; many nieces and nephews; five grandchildren; and several great-grandchildren. She was predeceased by her husband, Francis L. Madden; Ralph and Ruth (Lawson) Tavares; her brother, Ralph Tavares; and a sister, Norma Garcia.

Calling hours will be Sunday, Sept. 23, from 2-5 p.m., at Tighe Hamilton Regional Funeral Home, 50 Central St., Hudson, immediately followed by a memorial service in the funeral home. Burial will be held privately at a later date.