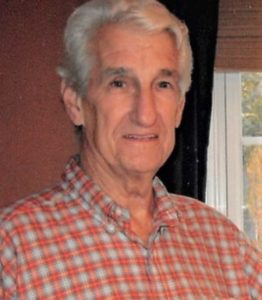 Northborough – Ralph N. Jackson passed away peacefully, at the age of 84, Friday, Jan. 4, 2019 with his beloved family by his side. He was the husband of 59 years to M. Suzanne (Audette) Jackson.

Ralph was born in Hartland, Vt., a son to the late Richard and Helen (Manwaring) Jackson. He spent his childhood in the Talcottvile, Conn. area, and was a graduate of Rockville High School, class of 1952, prior to joining the Army. Ralph was assigned to the Red Stone Arsenal where he specialized in radio and signal processing.

After serving his country, Ralph enrolled at U-Conn where he earned his degree in Electrical Engineering. He also attended WPI as he continued his training as an engineer.

Ralph’s workplace portfolio included numerous leadership roles in the development of defense radar and telecom systems. He was known as the “go-to” for troubleshooting and was recognized by his peers for his values of being genuine and credible, the ability to convey wisdom before emotion in business situations. His family will most remember Ralph for his unconditional love and gift of humility.

For numerous years, Ralph taught electronics and electrical appliance repair at the Worcester House of Correction. He has been instrumental in the local AA community and a testament to those he has helped along their own journey. Ralph enjoyed restoring antique radios, working on cars, playing banjo at church services, spending time with his family and participating in the shenanigans with the Rat Pack of Northborough.

His funeral Mass was celebrated Jan. 9 at St. Rose of Lima Parish of Northborough, followed by burial with military honors at Howard Street Cemetery.

Please visit Ralph’s Book of Memories at www.haysfuneralhome.com to view a more complete life story and to leave a condolence.