Grafton – Kris McMullin, director of community access at Grafton Cable Television, (GCTV), has announced the launching of the final episode in the new Grafton History Video Series. This episode, Part 5, describes the origins and development of the three mill villages of South Grafton and features local historians Rachel Costello, Walter Wojnar, Phil Gauthier and Skip Michniewicz. It is currently airing on the local television network at Charter Channel 191 and Verizon Channel 33 at 7 p.m. Mondays through Saturdays.

Other episodes already airing include: “Part 1: Hassanamesit, the Story of the Nipmucs”; “Part 2:

The Early Settlement”; “Part 3: Grafton’s Shoe Industry”; “Part 4: Grafton and the Civil War.” “With this series we hope to allow residents today to enjoy stories from Grafton’s rich past,” said McMullin. “I believe the people of Grafton will find this series fascinating and compelling.”

The series is produced by Linda Casey. All episodes are available On Demand through the GCTV website and on YouTube.com as “History of Grafton MA.”

Grafton Community Television provides programming on three public access channels in Grafton over the Charter Communications and the Verizon cable systems. Schedules for GCTV channels can be found at www.GraftonTV.org. 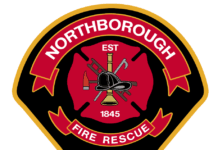