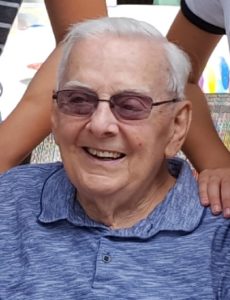 Hudson – John “Jack” Anastas, 83, passed away peacefully May 25, 2019 at Rose Monahan Hospice in Worcester, surrounded by his beloved family, after a period of declining health.

He was born in Woburn, son of the late Madeline (Pandolph) and Harry Anastas. He was predeceased by his brother, Paul, and sister-in-law, Maddy Anastas. He was a lifelong resident of the town of Hudson.

He leaves behind his wife of 57 years, Joan (Charbonneau) Anastas, and his children Jana Chamberlain and husband Matt of Shrewsbury, Stephen Anastas of Hudson, and Cathy Kadlik and husband Mark of Sturbridge. He enjoyed spending time with his grandchildren, Erica, Brian, Isabel, Maddie, Jackson and Benjamin, whom he adored. He also leaves behind many wonderful sisters-in-law, brothers-in-law, nieces and nephews.

Jack was an Army veteran stationed in Germany where he was the starting first baseman for the United States Army baseball team, known as the Kitzingen Red Sox. In 1958 the team won the European Championship.

He was well known in Hudson as part owner of A&A Pizza House along with his brother, Paul. Later he owned and operated Jack’s Coffee Shop located in downtown Hudson. After leaving the food business he worked for 13 years at Digital Equipment Corporation where he retired in 1992.

In lieu of flowers, a donation can be made in his memory to the American Diabetes Association at www.diabetes.org.