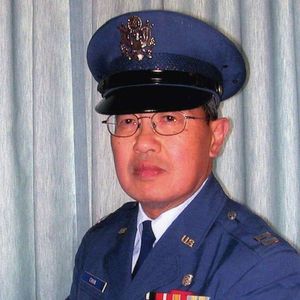 Born and raised in Marlborough, he was the son of the late George and Helen (Chen) Chan and the husband of Donna (Girouard) Chan.

George proudly served in the US Navy, USNR and the US Air Force Reserve retiring with the rank of Captain. He then graduated from Boston University followed by McLean Hospital School of Nursing and Mass Memorial Anesthesia Program. He enjoyed a long career as a member of the Marlborough and St. Vincent Hospitals Anesthesia Staff.

Following his retirement, he became a member of the National Park Service at Minute Man National Historical Park, Concord, where he served as a Seasonal Interpretive Ranger.

Besides his wife, George is survived by his children, Michael Chan of Scroggins, Texas, Brian Chan and his wife Lynn of Jardine, Montana, Kevin Chan of Marlborough and LeeAnne Combs of Boston, as well as his grandchildren, Ryan Combs and his wife Tatiana, Peter Combs and Brandon Chan, and his great-grandchildren, Nico and Abrianna. He was also the brother of the late Edna Wilson and Eleanor Chan.