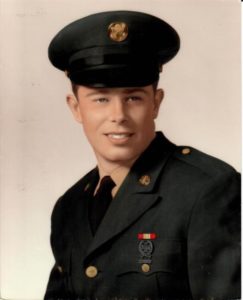 Hudson – David John DeFreitas, 73, of Hudson, passed away peacefully July 15, 2019 following a long illness. Mr. DeFreitas was the son of the late Francis and Doris DeFreitas.

He was born in South Boston on Dec. 20, 1945 and moved to Lake Boone (Stow), where he spent his early childhood years. His family moved from Lake Boone to Hudson in 1955.

David was an accomplished, multi-sport Hudson High School athlete, and a graduate of the class of 1963. He enlisted and served honorably in the U.S. Army from 1966 to 1969. After his military service, he joined the predecessor company known today as Verizon, where he worked for nearly 30 years.

Upon retiring, he acquired the long-owned family home and moved back to care for his Mother and Father in their later years. In his free time, Mr. DeFreitas enjoyed his camping trailer, the outdoors, fishing, and snowmobiling in Massachusetts, New Hampshire, and Maine. One of his greatest joys was spending time with friends during his regular afternoon routine at his favorite clubs in Hudson. He was also an active volunteer in the New Vision Pioneer network.

Mr. DeFreitas was a long-standing member of the VFW – Post 1027, Hudson, the American Veterans – Post MA 0208, the Hudson Elks Club, and the Loyal Order of Moose – Lodge 1129, Marlborough.

A graveside funeral service will be held Monday, Aug. 5, at 2 p.m., at the Forestvale Cemetery, Broad Street, Hudson. Arrangements are entrusted under the care of Tighe Hamilton Regional Funeral Home, 50 Central St., Hudson.

In lieu of flowers, memorial donations may be made in David’s name to a veterans’ charity of your choice.