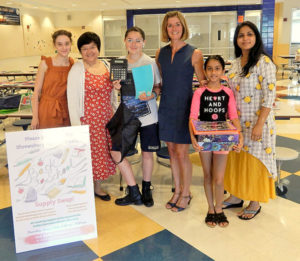 Shrewsbury – A steady stream of people stopped by the cafeteria at Oak Middle School Aug. 15 to donate or pick up new and gently used school supplies. The event was held to support the families in town.

“Community members were waiting here at 7:30 a.m. with big bags of supplies,” stated Dr. Jane Lizotte, assistant school superintendent, who came up with the idea for the swap. “Staples in Shrewsbury has been very generous, too – they donated about seven boxes of supplies.”

Roughly 12 cafeteria tables were filled with supplies. There were notebooks, binders, pens, pencils, folders, bags and even calculators donated by community members, school families and grandparents whose generosity was very much appreciated.

Lizotte noted that leftover supplies will be donated to the Grafton Street Elementary School in Worcester. Shrewsbury Public Schools has a partnership with the school through high school faculty member, Denise Satterfield, who runs a program at that school.

“This is the first time we are giving it a whirl,” said Lizotte. “I was in my basement one day getting out college stuff [for her kids] and I looked at bins from years of four children going through the schools and I said ‘I cannot throw this away.’”

She added that people have been calling for supply lists and so many have supplies so it made sense to collect it all in one place. The idea was for people to drop off their supply surplus and pick up what they might need.

Lizotte shared that one little boy came in and said, “It feels like my birthday. I can get whatever I want!”