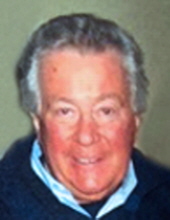 Born in Lynn, and raised in Reading, Frank was the son of Harry and Mary (Fay) Taylor Sr.

He opened his business, Quality Catering Service of Northborough in 1971, which served canteen catering for Central Mass. for over 20 years.

Frank was always there to support his many employees and friends, and would do anything to help anyone. He retired in 2003.

Among his passions, Frank was an avid golfer, boater, and loved his cars, especially his Lincoln Continentals and Corvettes. Over the years, his memberships included: The Ancient and Honorable Artillery Company of MA, MA Restaurant Association, Westborough Rotary Club, and Northborough Little League. Frank most recently worked in the security department at St. Gobain’s in Worcester, for over 10 years.

His wife, Martha (McLeod) died in 2012. He leaves behind his companion with whom he lived, Kathleen (Hayes) Cardoza of Shrewsbury; his children, Jacqueline Taylor of Northborough, and Sean Taylor and his wife Tori (St. Martin) of Worcester; two grandchildren, Kyle St. Martin and Paige Taylor both of Worcester; two brothers, Harry Taylor Jr. and Dr. Joseph Taylor and his wife Marie (Brennan). He is predeceased by a brother, Dr. Robert Taylor. Also surviving are many nieces and nephews. Frank will be remembered as a devoted father and grandfather.

A Celebration of Life, and what would have been his 75th birthday, will be held on Sunday, March 15, 2020 from 12-4 p.m. at American Legion Post 234, 402 West Main St. Northborough. Chiampa Funeral Home of Shrewsbury is assisting with arrangements.