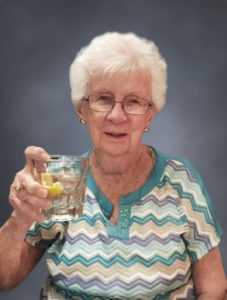 Hudson – Mary A. “Marie” Coyne passed away peacefully on May 09, 2020, after a period of declining health. She is reunited in heaven with her beloved husband, George A. Coyne, Jr.

Mary was born in Waltham, MA on October 1, 1921, daughter of the late Warren F. and Ellen (Gardner) Carroll. She was raised in Waltham, where she graduated from St. Mary’s High School in 1939, subsequently attending Fay Business School in Boston, MA. Upon completion of her studies, she entered the business world as the Executive Assistant to the District Manager of the former New England Telephone Company, a position she held for 11 years.

Marie left her career to marry George Coyne Jr. in October 1952, making their home in Hudson, MA, where she remained a resident for over 60 years. Following the death of her husband in 1960, Marie became the Office Manager of Dougherty Tool Co., a position she held for many years.

Throughout her life, Marie was fiercely devout in her Catholic faith. She was a daily communicant and Eucharistic Minister at Christ King Church and later at St. Michael Parish. A former member of the Catholic Daughters of the Court of St. John Eudes, Marie also served as a member of the St. Michael Parish Council. She was an avid fan of both her daughters’ and grandchildren’s sports events, attending many of their school functions.

Marie is survived by her two daughters, Marie E. Coyne and Maureen C. Palange and her husband, John, all of Hudson. She is also survived by her five grandchildren: Nicholas Palange and his partner Amy Hoffman of Hudson, Joseph Palange of Hudson, Dominic Palange of CA, Katherine Marsan of Hudson, David Marsan and his fiancée Jenna of Berlin, and one great grandson, Colton Marsan. Marie also leaves her dear friend, Linda Driscoll of Hudson, and several nieces and nephews with whom she was very close. Marie was predeceased by her brother, Warren F. Carroll, Jr. and her nephews Warren “Bud” Carroll and Timothy Carroll.

Due to Covid 19, all services will be held privately. A Memorial Mass and a Celebration of her Life will be held at a later date. Tighe Hamilton Regional Funeral Home is honored to be entrusted with her arrangements.