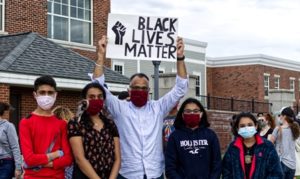 Westborough – In response to the killing of George Floyd while being placed under arrest in Minneapolis, Minn. protests have been held all across the United States. In communities in central Massachusetts, peaceful vigils have been held to show solidarity with the Black community and to denounce the actions of former Minneapolis police officer Derek Chauvin. The town of Westborough held an anti-racism solidarity vigil on June 7 at the Bay State Common Green. Hundreds of town citizens attended to support the Black Lives Matter movement and to remember the lives that were lost due to racial inequality.

The evening started with a speech from the organizer of the event, Alla Baranovsky. The speech, admittedly short so that attention would not be detracted from the voices of color, focused on the purpose of the vigil. Baranovsky described the vigil as a call to action and encouraged the citizens of Westborough to pledge their support, economic and in other forms, with the ultimate goal of dismantling racial inequality that exists within the United States.

Rabbi Rachel Gurevitz of Congregation B’nai Shalom in Westborough acknowledged that as a white woman, she would never comprehend what it is like to be Black in America but promised to try to learn. In her remarks, she asked everyone present to take a step towards understanding the Black experience by simply “listening”.

This theme of indifference was noted by Pastor Audi Lynch of the Faithful Church of Christ in Dorchester, Mass. Lynch called on White allies to not be indifferent towards securing equality in America, rather, to play an active role in supporting this cause. He also asked everyone present to “remember their why”, for it is very easy for people to forget the reasons for which they are fighting.

State Sen. Jamie B. Eldridge (D-Acton) spoke about his political intentions to work towards a fairer society. Eldridge referenced and voiced his support for the ten-point plan that was created by the Massachusetts Black and Latino Legislative Caucus to combat systemic racism and police brutality in the United States. “It’s not just about law enforcement… but it’s about voting rights, education, our healthcare system and changing those things is going to be incredibly difficult”, Eldridge said. He also called on his constituents to “hold their elected officials accountable”.

State Sen. Carolyn Dykema (D-Holliston) also addressed the crowd, agreeing with Eldridge that “leadership at every level in government needs to change.”

“We need to create safe places and listen to Blacks and hear their stories,” she said. “We have a lot of hard work to do and a lot of heart work to do.”

Two students from Westborough High School also shared their thoughts on police brutality in the United States through spoken poetry. Claire Lord read her thoughts on the Black Lives Matter movement and her response to people when they say that “all lives matter” in her poem “Breonna Taylor should have been 27 on June 5”. Nanayaa Dadzie shared her experiences as a Black woman in America. She expressed her experiences of being catcalled and being yelled at walking with her family to a public library. Dadzie spoke on behalf of Black people in America when she said, “We will not be silenced. We refuse to be silent.”

The vigil ended with a moment of silence, as those who were able to kneel did so as a symbolic act of solidarity. During this moment of silence, an altercation occurred in opposition to the movement, but was quickly dispelled by town citizens surrounding the person responsible. 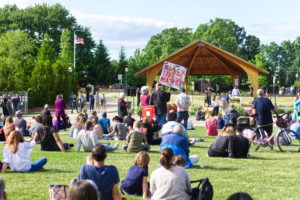 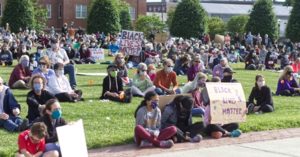 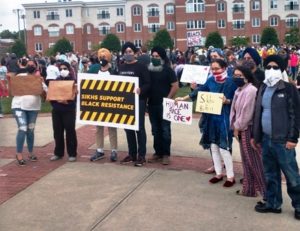 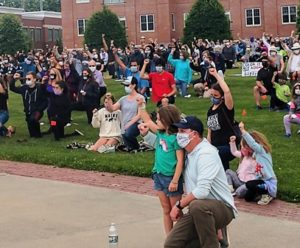