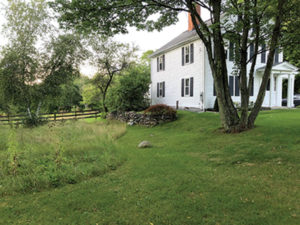 Marlborough – Mayor Arthur Vigeant, in a letter to the City Council, asked for approval to transfer $440,00 from the economic development budget line item (which includes revenue from rooms taxes) to the Marlborough Economic Development Corporation (MEDC) for the purchase of 1.23-acre property at 481 Elm Street. A portion of that property had been identified as a possible location by the West Side Fire Station Advisory Committee that was formed several years ago.

The need for a West Side Fire Station has been a top priority for city officials following a significant increase in commercial and residential development including the Apex Center. The search committee then started looking for possible sites in that area. City officials and Fire Chief Kevin Breen have acknowledged they need to address issues with slower response times to calls given the lack of a nearby fire station.

The Elm Street property includes a 2,100 square foot historical house which, if purchased, Vigeant said the city would look to keep intact and sell (along with the minimum residential lot size of approx. 15,000 square feet) to recoup some funds.

“The city would retain the remainder of the lot (approximately 35,000 square feet of land) behind the house,” he said.

“Following the search committee’s list of potential sites, we reached out to the owner of the property at the corner of Elm and Locke Drive two years ago but they weren’t interested in selling and when we found it had now come up for sale, we wanted to make an offer,” Vigeant said.  “Obviously, the remaining land wouldn’t be a large enough lot for a fire station (additional land would have to be purchased) but we could use it for a number of projects if we chose to.”

If and when, a plan for a West Side fire station on that land (or that would include that land) the process would include a community meeting (including abutters), a public hearing and Council discussion.

The property behind the house sits between adjacent properties backing up to Bigelow Street on one side and Locke Drive on the other.

Breen said he believes a West Side fire station will be built before his next five-year term ends.  He said it takes approximately three years to purchase, design and construct a fire station.

Vigeant stressed repeatedly, that a portion of the 481 Elm Street land is a “potential” site but that  right now the new library is top-of-mind given construction was originally expected to begin by 2021 prior to the coronavirus pandemic and the City has a bond for the project.  The library will be temporarily relocating to the Walker Building when construction begins and when it is ready and safe to do so.

The City Council’s Finance Committee will be reviewing the $440,000 money transfer for 481 Elm St. at its September 22 meeting. If approved, the request goes back to the City Council for a formal vote.