Boston – Shrewsbury teen and budding filmmaker Deniz Akyurek recently made his debut at the Boston International Kids Film Festival (BIKFF). Due to the pandemic, it was a virtual event this year, which took place Nov. 20 to Nov 22. Akyurek’s five-minute short horror film, “Closet,” is about a boy who makes a harrowing discovery about his home.

Eighteen-year-old Akyurek graduated from Shrewsbury High School last spring. He is now a freshman at Emerson College in Boston, where he is studying filmmaking.

“I am very excited to be a part of the Boston International Kids Film Festival this year,” he said.

He explained that the film was shot with a couple of his friends. Filming began last winter before quarantine. The lockdown presented logistical problems which he managed to overcome. 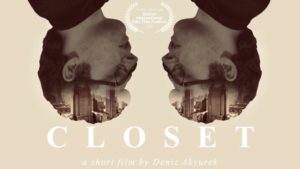 “It was a simple exercise in technique…for entertainment purposes,” he noted.

He shared that his interest in filmmaking evolved from his love of hockey and expanded from there.

He knew that making films had become more than just a hobby when he invested in his first camera.

His work has been included in other festivals, such as the Boston Streaming International Film Festival held in Arlington and the All-American High School Film Festival in New York City.

When asked about his future plans, he replied, “…Obviously graduate from college…and hopefully down the road move to L.A. and get a job directing.”

The festival is a program of Filmmakers Collaborative with the purpose of introducing young people and their families to “the best that the world of independent filmmaking has to offer.” Now in its eighth year, the BIKFF will feature 70 films representing 17 countries with both professionally and student-made documentaries, animated shorts, and short narrative films appropriate for children of all ages.