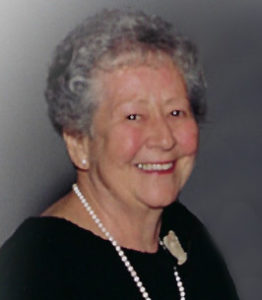 Shrewsbury – Joan (Miller) Couture, 87, of Shrewsbury, passed away peacefully Dec. 12, 2020 at Rose Monahan Hospice Home, with her loving family by her side.

Born in Leominster and raised and educated in Worcester, Joan was the only daughter of the late Robert A. and Helen P. (Mosher) Miller. She grew up off Lincoln Street and graduated from South High School, where she was a two-sport athlete. She was captain of both the basketball and field hockey teams, and carried her love of sports throughout her life. Interestingly enough, Joan met the love of her life, Eneas J. “Jerry” Couture, while roller-skating – they were married on Oct. 30, 1954, recently celebrating their 66 wonderful years together. The pair settled in Shrewsbury to begin their family.

Prior to her marriage and becoming a full-time mother, Joan worked for State Mutual Insurance in Worcester and Wyman Gordon in Grafton. When her children grew older, she became a Tennis Coach for Shrewsbury High School for over 17 years.

In her free time, she enjoyed traveling extensively, especially with Jerry; volunteering for Shrewsbury Parks and Recreation for many years; and playing tennis at the Shrewsbury Racquet Club.

Along with Jerry, Joan is survived by their daughter, Cheryl J. Lonardo and her husband Frederick of Holden, and their grandchildren, Nicole J. Lonardo of Holden and Daniel J. Lonardo of Auburndale, as well as many extended family members. She was predeceased by their son, the late David J. Couture, in 2015.

Due to COVID-19 restrictions, a funeral service will be held privately for Joan’s family, and burial will follow at Mountain View Cemetery.