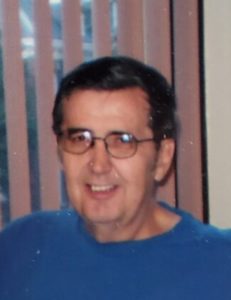 Frank graduated from Marlborough High Schooll, Class of 1967. He was an outstanding football player. He was named a 1966 Enterprise Sun Allstar and received the Lineman of the Year award.  His friendships made in high school and on the football field were his treasured memories.

In 1977, he moved to Kissimmee, Fla., where he lived for 20 years. He enjoyed going on cruises and playing softball. He lived at Academy Knoll for many years where he enjoyed sitting and chatting with his neighbors on the porch. Frank enjoyed writing stories, doing crossword books and listening to his music. He was an avid sports fan of the Boston Red Sox and NE Patriots. His life was simple but most important to him were his family and friends.

Visiting hours will be held on Friday, May 7, from 5-7 p.m., at the Slattery Funeral Home, Inc., 40 Pleasant St., Marlborough. A funeral Mass will be celebrated on Saturday, May 8, at 10 a.m., at St. Matthias Church, 409 Hemenway St., Marlborough. Burial will follow at Evergreen Cemetery, Wilson Street, Marlborough.

In lieu of flowers, donations may be made in Frank’s memory to the Marlborough Community Cupboard, 255 Main St., Marlborough, MA 01752.