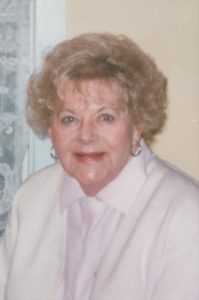 Worcester – Elaine M. Bourque, 88, of Worcester, formerly of Grafton, passed away peacefully on May 8, 2021 at Christopher House of Worcester. She was the wife of the late Conrad A. Bourque.

Born in Dover, N.H., she was the daughter of the late Albert and Dora (Labranche) Davy. She was educated in Dover and graduated from St. Mary’s Academy in Dover.

Elaine was employed as an Administrative Assistant for State Mutual Insurance Company in Worcester retiring in 1993.

Elaine loved spending time with her family, especially with her grandchildren who she affectionately referred to as her “four jewels.” They were her pride and joy and she could be found in attendance at their sporting events or dance recitals. She also was an avid reader and loved her Hallmark movies. She was happily married to the love of her life, Conrad, for 57 years.

She is survived by two children, Julie A. Frick and her husband Mike of Nashua, N.H. and Kyle S. Bourque and his wife Patti of Leicester; four grandchildren, Kelsey Bourque, Will Rowe, Derek Bourque, and Shawn Bourque; and many cousins in New Hampshire, who were near and dear to her heart. She was predeceased by a brother, Albert Davy.

Funeral services, with burial in the Massachusetts National Cemetery of Bourne, have taken place.

Donations in her memory may be made to the charity of your choice.