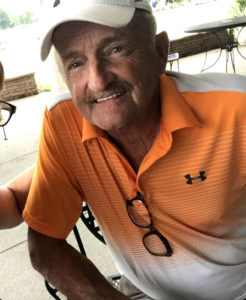 Hudson – Samuel “Sam” Patrice Aucoin, 72 of Hudson, passed away peacefully, surrounded by his loving family, on May 22, 2021 at Mass General Hospital in Boston. He leaves his beloved wife of 48 years, Rita M. (LeBlanc) Aucoin.

Sam was born in Terre Noire, Nova Scotia, Canada on Feb. 8, 1949. He was one of 15 children of the late Marcellan and Elizabeth (Chiasson) Aucoin. He graduated high school in Terre Noire and later immigrated to Waltham, Massachusetts in 1971 to be with his future bride, Rita LeBlanc. Sam and Rita eventually settled in Hudson in 1978, where they raised their daughters and still currently reside.

Sam was an extremely hard, dedicated and selfless worker. He was an assistant grocery manager at the Waltham Supermarket for 18 years, all while delivering the Boston Globe every morning. He later worked as a receiver for a wholesale flower distributor for 27 years. In addition to his day job, Sam was most known for his love and dedication to landscaping. There were always lawn mowers and other lawn tools that filled the back of his (many) Nissan pickup trucks over the years. Sam certainly made a lasting impression on his 100+ customers that he had throughout the years. Those in which have been expressed to his family over the past few months.

Sam had many hobbies and interests which he enjoyed in his free time. He never missed his chance to bet on his favorite number 1-5-5 by buying lottery tickets for the daily Numbers Game. He would also frequently indulge in buying some scratch tickets. Both of which he always fantasized of winning the “Mega Bucks.” Sam also loved to golf and play pool. He was a diehard Boston Red Sox fan and he rarely missed watching a game on his TV, which otherwise usually stayed tuned on CNN between games. He also enjoyed a glass of good red wine along with a lobster dinner.

Sam was known for being a prankster, his great sense of humor and his dirty jokes that he used to tell. Although he was sometimes “a man of few words,” he showed his love and affection through his caring and generous actions toward others. Sam was most proud of his family, especially his grandchildren who he adored more than anything. Sam cherished the time he spent with them and found his greatest joy in life watching them play their sports.

Relatives and friends are invited to a period of visitation on Friday, May 28, from 4-7 p.m., at Tighe Hamilton Regional Funeral Home, 50 Central St., Hudson. A Mass of Christian Burial will be celebrated on Saturday, May 29, at 9 a.m., at Saint Michael Parish, 21 Manning St., Hudson, followed by a procession to Forestvale Cemetery for committal services.

In lieu of flowers, donations can be made in memory of Sam to the following charity; Epilepsy Foundation https://donate.epilepsy.com/index.cfm?fuseaction=donate.event&eventID=747 or Brain Injury Association of Massachusetts – https://biama.wufoo.com/forms/biama-donation-form/.