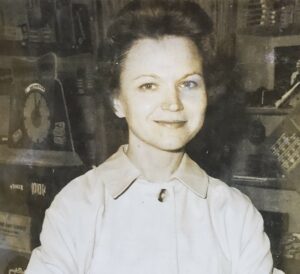 She leaves her daughter, Karen T. Anastasi and her husband Paul of Shrewsbury; a son, Steven Tersa of Port Orange, Fla.; a brother, Donald Saroka and his wife Alice; four grandchildren, Elizabeth Stone and her husband Eric of Ware, Nick Anastasi of Harpswell, Maine, Caroline Anastasi of Arlington, and Eric Kovaleski of Palm Coast, Fla.; six great-grandchildren, Amelia and Milo Stone, Sebastian Petty, and Ethan, Ayden and Riley Kovaleski; and many nieces and nephews. She was predeceased by her daughter-in-law, Gayle Tersa.

She was born in Worcester, the daughter of Joseph and Mary (Korsak) Saroka.

Theresa retired in 1988 from Southbridge High School where she enjoyed enriching students’ lives and continued inspiring others long after retiring. She enjoyed reading, gardening, her cats and, most of all, spending time with her family. Ms. Tersa was known as a Feng Shui and Reiki Master.

Theresa and Dimetri loved to travel together, especially to Ogunquit and Hawaii to name a few.  She was a former member of St. Michael’s Romanian Orthodox Church in Southbridge.

In lieu of flowers, memorial contributions may be made to Jewish Health Care Hospice, 629 Salisbury St., Worcester, MA 01609.