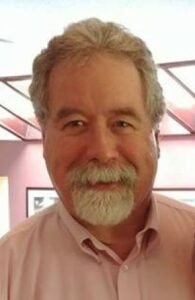 Marlborough – Michael Mahoney, 61, died at home in Marlborough on June 16, 2021 from complications of Frontal Temporal Dementia. Born on May 1, 1960, and raised in Beverly, he was the youngest son of the late Mathew and Patricia (St. Hilaire) Mahoney.

Mike was educated at St. John the Evangelist School and St. John’s Prep (1978), where he was an outstanding member of the Drama Guild, particularly adept in comedy. He earned a BA in Communication Studies from UMass Amherst and was a life-long Red Sox fan who cried with joy over their 2004 World Series win.

Michael was an active communicant of Immaculate Conception Parish in Marlborough.

Visiting hours will be held Friday, June 25, from 4-7 p.m., at the Short & Rowe Funeral Home, 95 W. Main St., Marlborough. The funeral Mass will be celebrated on Saturday, June 26, at 11 a.m., at Immaculate Conception Church, 11 Prospect St., Marlborough. Burial will follow at Evergreen Cemetery of Marlborough, beside his beloved Katy. Relatives and friends are invited.