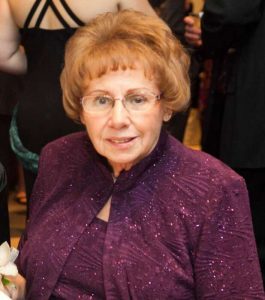 “Jane” was born in County Down, Northern Ireland on August 10, 1940. She was the oldest of four children of the late Matthew Johnston and Sarah Ann (Snowden) Johnston. Jane emigrated with her family from Northern Ireland to the United States when she was 7 years old. She graduated from Brookline High School in 1959.

She is survived by her husband of 57 years, Stephen Sugarman; her daughter Dawn Sugarman and her husband Randy Miron; her son Michael Sugarman; her sisters Rose Ann Ware and Lorna Garneau; her sister-in-law Helen Levine; her nephews David Garneau, Jonathan Levine, and David Levine; her niece Barbara Starkand; and three grandchildren Sofia, Garrett, and Pierce. She was predeceased by her brother Matthew Johnston, and brothers-in-law Harold Ware, Richard Garneau, and Bernard Levine.

Jane loved gardening. She worked at Colonial Gardens in Concord, MA for many years and was a long-time member of the Hudson Garden Club. She was also an avid bowler.

Family and friends may attend visiting hours on Tuesday, Sept. 28, 2021 from 5:00 to 7:00 PM at the Tighe Hamilton Regional Funeral Home, 50 Central Street, Hudson, MA 01749. A service and celebration of Jane’s life will be held on Wednesday, Sept. 29th (Time to be announced ASAP) in the funeral home. Burial in Beit Olam Cemetery, Wayland will be private.