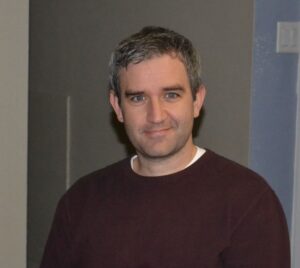 Shrewsbury – Matthew R. Chamberlain, 47, passed away peacefully on October 4th surrounded by his loving family, after a hard-fought battle with cancer. He was born in Lowell, son of Robert Chamberlain and the late Marcia (Pestana) Chamberlain of Westford, MA.

He is survived by his wife of 16 years Jana Anastas of Shrewsbury, along with his three children Benjamin and Jackson Chamberlain of Shrewsbury and Erica Paquette of Waltham. He also leaves behind his sister Sarah (Chamberlain) Kinghorn and husband Grant of Littleton along with his nephews Ewan and Andy.

Matt was raised in Westford and was a graduate of Bishop Guertin High School in Nashua, NH, where he played hockey and golf. He received his Bachelor’s degree from University of Rochester and most recently worked as an IT Manager for DentaQuest.

Throughout Matt’s life he played countless rounds of golf with his father, as well as many seasons of men’s softball. When he wasn’t playing men’s league hockey himself, he was on the bench coaching his two sons. Matt cherished the days he got to spend on the ice with them and the team.

In the summer, Matt often spent time visiting New Hampshire and Wells, Maine with his wife and children. He especially enjoyed finding the best ice cream spots and beating everyone in mini golf. Matt was an avid cycler and participated in biathlons and triathlons, including a Half Ironman in 2008. He had an undeniable sense of adventure and his humorous presence went unmatched.

Matt fought relentlessly for years to be there for his family. He was an incredibly strong-willed individual and was a beloved husband, father, son, brother and uncle. He will be deeply missed.

Visitation will be held on Thursday October 14, 2021 from 10-11:30am immediately followed by a memorial service at Tighe Hamilton Regional Funeral Home, 50 Central St. Hudson, MA 01749.