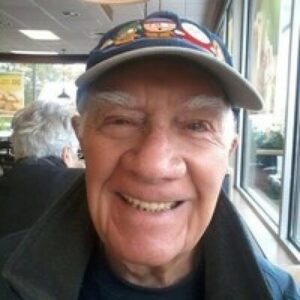 Born in Worcester, Teddy was youngest of 6 siblings of Italian Immigrants Cosimo and Stella (Gardella) Mero. He lived his entire life with his family in the Italian neighborhood on Shrewsbury St during the Depression years and was one of the first and the longest residing resident at Mt Carmel Apts, over 30 years before moving to South Grafton with his soulmate Bob, who became Ted’s caregiver for over 3 years.

Teddy worked over 17 years as a shipping Clerk for the Paul Revere Life Insurance now Unum, changing professions, as a hairdresser for R.H. Whites in Lincoln Plaza, and a few other area beauticians, Bonardi’s Tuxedo Rentals of Worcester as an alteration specialist, and as aside job, hanging paper with Bob  for themselves, TB Wallcovering, for 16 years before retiring for good.  Ted’s first job was as a security guard for Zayre’s department store.

He was a lifelong member of Our Lady of Mt Carmel Parish of Worcester and now joins his church community of “Italian family” who mostly have  passed on.  Teddy loved his animals and being around them.  But, almost daily Teddy could be found alongside Robert, his best friend, who were inseparable for 37 years, on Shrewsbury Street, out and about.  Teddy was a sun worshipper who loved Hampton Beach in his younger days,  he also spent a lot of time up to Waterville Valley , NH with Bob vacationing.

Calling hours will be held Sunday, October 31st from 3 pm to 6 pm in the MERCADANTE FUNERAL HOME & CHAPEL, 370 Plantation St.   His funeral will be held Monday,  November 1st from the funeral home with a procession beginning at 9:30 to St. James Church, 89 Main Street, South Grafton where his Mass of Christian burial will be held at 10:00 am.   Burial will follow in St John Cemetery.

Teddy wishes to commend St. Vincent Hospital and its entire staff of doctors and nurses for his care and their devotion to their job as he aged and died from heart disease.

In lieu of flowers memorial remembrances in his name can be made to the American Heart Association,  300 5th Ave, Waltham, MA  02451, and to the Worcester Animal Shelter, 139 Holden Street, Worcester 01606.