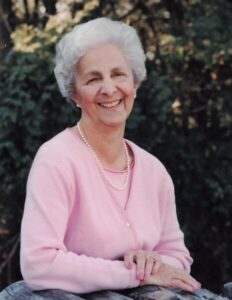 Dunstable – Susan M. (Marinelli) McGovern of Dunstable, MA passed away on Wednesday, January 26, 2022 at the home she had lived in since 1947. At 102 years, she was the oldest resident of Dunstable, a title she did not relish but reluctantly acknowledged.

Born in Marlboro, MA on April 7, 1919, she was the daughter of Susan and Francesco Marinelli. Susan grew up in Marlboro in a hard-working loving family with 12 siblings. Prior to their deaths, she remained close to each of them.

After finishing her education in the Marlboro schools, she met the man she would marry, George R. McGovern, who predeceased her in 1974. Although their early married years in South Acton were filled with many trials and setbacks, they continued to share George’s dream of one day owning a cattle farm. After moving to Dunstable, that dream was realized. Susan, a proud, quietly intelligent but unassuming woman, worked alongside her husband and their seven children to build the business into what is now known as McGovern Farms.

A steadfast, constant, and always supportive presence in her children’s and grandchildren’s lives, the only legacy that mattered to her was the love she had for her family.

Gone from this Earth but always in her heart were an infant daughter, June, sons-in-law Richard Martin and Harry Lamb, and grandchildren Michael Martin and Daniel Hollenkamp.

Susan’s wish was to remain in her home where she had lived and loved since 1947. Thanks to the incredible devotion of her children and their spouses, and their heartfelt care, her wish came true.

The family wants to thank all Susan’s caregivers throughout these last several years, with special recognition to Dr. David Speigelman, MD and Melissa and Nancy from Nashoba Nursing & Hospice for their tender attention to Susan.

There will be no calling hours. Family and friends are invited to a Funeral Mass to be held at Our Lady of Grace worshipping at St. Joseph Church, 28 Tarbell Street, Pepperell, MA on Wednesday, February 2, 2022 at 10 a.m. Burial will follow the Funeral Mass at Central Cemetery in Dunstable. A remembrance of Susan will be held at a later date.

In lieu of flowers, donations in Susan’s memory can be made to Nashoba Nursing & Hospice, 3 Patterson Road, Suite 3, Shirley, MA 01464.

The McGaffigan Family Funeral Home of Pepperell assisted with arrangements.