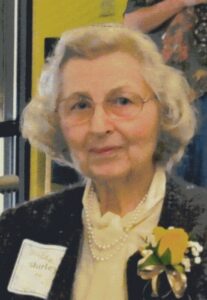 Born on April 25, 1923 in Lincoln, Nebraska the oldest child of Dr. Marschelle H. Power and Ruth Henninger Power, Shirley was reared in Rochester, Minnesota, where her father was the head of the Division of Biochemistry at the Mayo Clinic. She graduated from the University of Minnesota, Phi Beta Kappa, and subsequently earned a Master’s Degree in psychology from the same school. She then taught psychology at Denison University in Granville, Ohio until she married.

In 1950, Shirley Power married Dr. John Henry Ivy in Rochester, Minnesota. They relocated to Elkhart in 1954 when her husband, together with several medical school friends, founded the Elkhart Clinic.

The Ivys were married for 51 years, with her husband predeceasing her in 2012.

During her time in Elkhart, Mrs. Ivy was a dedicated volunteer. In 1961 she and her husband were among the founders of the Unitarian Universalist Fellowship of Elkhart, where she served on the Board of Directors for many years and was a Sunday School teacher. She and her husband were instrumental in the design and building of the UUFE fellowship building. She was also the founder and first Executive Director of Planned Parenthood of Elkhart and a long-time member of the League of Women Voters.

She was an accomplished seamstress. Her other interests included gardening, reading and American history. After her husband’s retirement, the couple enjoyed many travels through the United States and Europe.

The Collins Funeral Home of Marlborough assisted with arrangements.