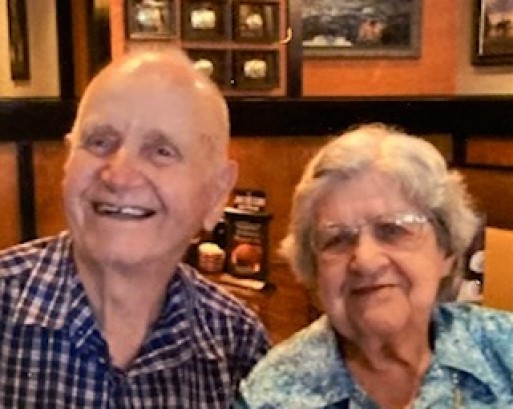 Alice was born on October 28, 1923 in Easthampton, MA to parents Nelson Peloquin and Antonia Meggison Peloquin. She attended Easthampton grade schools as well as two years of high school in Canada. Upon returning home she worked at a local clothing factory. Alice loved to sew, crochet and knit. Frank and Alice met in Easthampton while he was working on Mt. Tom and married June 27, 1942. They celebrated their 80th Wedding Anniversary on June 27, 2022.   They were both lifetime members of the Upton State Forrest and Southborough Rod and Gun.

Frank F. Evans 100, passed away peacefully on July 27, 2022. He was born November 4, 1921 in Westborough, MA to parents Albert Evans and Ruth Fellows Evans. He attended Westborough grade schools and started working on a farm in Westborough around the age of 12. He worked until April of 1938 and joined the Civilian Conservation Corps. He was stationed at the Mt. Tom Camp in Holyoke, MA where he helped clear and build roads. In December of 1942 he joined the US Army and was discharged February 1946. He retired from Perini Corporation in 1983.   Frank enjoyed hunting, fishing, boating and the outdoors.

They leave their daughter and son-in-law Diane Bryan, and son Frank, three grandchildren and their spouses, Scott and Patty, Leigh and Michael, Lynn and Steve. They also leave six great-grandchildren Cam, Maddi, Brooke, Morgan, Abby and Paige and several nieces and nephews.

A private burial will be held in Easthampton, Mass.

The Short & Rowe Funeral Home is in care of the arrangements.