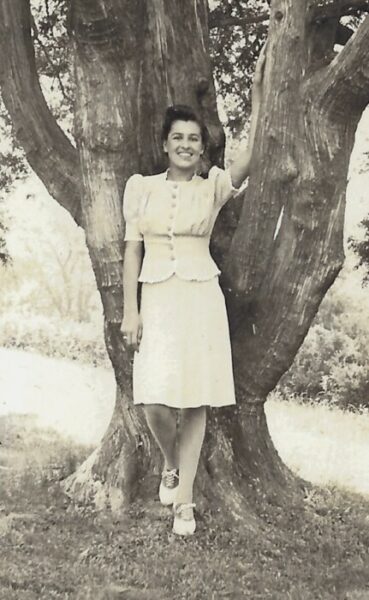 She was predeceased by her husband Thomas Joseph Naves and two daughters, Jennifer Jeanne Naves, and Paulette Edith Naves. The daughter of the late Anastas and Pauline (Christie) Stephens, she credited her “Albanian genes” with her long and active life, first in Hudson and then in Marlborough.

Dora and Tommy started their life together in Las Vegas, returning to the East Coast when they found out they were expecting the first of four girls. Tommy became a firefighter, while Dora taught cooking at the Girls Club on Mechanic Street. Soon after, they embarked on their next adventure to acquire investment properties. Her children and later grandchildren acted as her own personal squad of wall paperers, painters, and cleaners. Dora’s affinity for real estate continued with her first real estate license at over 50 years old. She worked for many years as a Century21 agent for Greg Mitrakis, before founding her own business: Dora Naves & Associates.

Most knew to look for her situated behind her desk at her real estate office on Hosmer Street, always welcoming visitors, both new and familiar. The exception to this rule was Sundays at St. Luke’s Church in Hudson. Dora was a pillar of the parish for decades and was later granted a lifetime vestry position.

Beyond her work and church life, Dora extended her heart to its furthest reach, never tiring of helping others. She was a life-long volunteer, often driving cancer patients into Boston for treatment, an extension of the American Cancer Society phone line she operated out of her home for many years. She taught her family the importance of always helping those who were less fortunate, whether they were human or animal. This tendency to help others came from her mother. Though they were not well off, Dora’s mother always ensured that they sent whatever they could to assist other families in need. Likewise, she attributed her passion for gardening to her father, often regaling her family with stories of their massive garden on Cherry Street. Like her father, she loved having her hands in the dirt.

She is survived by her two daughters, Stefanie R. Ferrecchia and partner Bobby Kays of Marlborough, MA, Pamela A. Naves of Gibson, NC; her grandchildren, Christie, Aaron, and Jenna Ferrecchia, and Gabby Perez along with other relatives and friends.