Southborough – Chris and Melinda Shanahan met while working together for an ambulance company. They married in June of 2009 with nothing but dreams and hopes for a healthy and prosperous life together. Melinda began nursing school while Chris worked three jobs to make ends meet: full-time as a firefighter for the Southborough Fire Department, part-time for Medstar Ambulance in Worcester and per diem for the Holden Fire Department.

On Jan. 24, 2011, Chris and Melinda welcomed their first child, a son they named Brendan. From the start, Brendan was a happy, easily satisfied baby. He slept through the night at an early age. He loved his food, his toys, and strangers (who often commented on his “beautiful red hair”). Brendan was a typical little boy who won the hearts of all who knew him.

“Everything made him happy,” Melinda said. “He was one of those children who, if you were to take care of him, made you want to have kids because he was so content and made parenting look easy.”

In early July everything changed. Chris and Melinda noticed a change in Brendan's behavior. He was irritable, more clingy than usual, not eating much and wanted to be carried rather than walk. Suspecting an ear infection, teething or possibly an early onset of the “terrible two's,” Chris and Melinda took Brendan to the pediatrician. Subsequent blood tests showed drastic decreased levels in Brendan's complete blood count (CBC)?indicating some sort of cancer. On July 12, following a bone marrow biopsy – in a moment that will forever be etched in their hearts and minds – Chris and Melinda were told that Brendan has “Acute lymphoblastic leukemia.”

“I had heard of these situations happening to other people,” Melinda said. “Honestly, I have no one close to me who has gone through something like this, but I have heard stories of people who have, and I felt empathy as a fellow parent. With parenting comes the fear of uncontrollable things happening to your children, but for it to actually happen just?didn’t?seem like it could ever be a possibility.”

Following the diagnosis, Brendan was admitted to UMass Memorial Hospital, where he was referred to as “the mayor of 5 East.” He underwent a series of bone marrow biopsies, surgery to place his central line and began what will be 3-1/2 years of chemotherapy. Unfortunately, Chris said, the people-loving Brendan developed a fear of strangers while in the hospital. Back home now, Brendan's smile is returning, and his parents are hoping to rebuild his trust in people.

Chris and Melinda have been given Brendan's treatment plan through mid-August at which time another bone marrow biopsy will be performed to determine the course of treatment. For the time being, Brendan has twice daily administration of home medications with daily heparin flushes of his central line, weekly chemotherapy and dressing changes.

According to Chris and Melinda, the outpouring of support that they have received from the firefighting community, family, friends and even strangers has been overwhelming.

“I will never be able to say “thank you” enough to have it truly reflect how I feel about this,” Melinda said. “Everyone who has put in the time and efforts to help us is just breathtaking. With all of the horrible things happening in the world that plague the news every day, to know that people would do so much for us just so we can be less stressed and make things more comfortable for our son makes me regain faith in humanity.”

The Southborough firefighters have begun a relief fund to assist the Shanahan family. Donations can be sent to: Brendan Shanahan Relief Fund, St. Mary's Credit Union, 439a Main Street, Hudson, MA, 01749. The staff at Medstar Ambulance (headed by dispatcher Katie Piazza) is selling “Brendan's Battle” wrist bands to raise money for the family. To purchase a wrist band, contact Piazza at: kpiazza@medstarma.com. In addition, there will be?a 50-50 raffle at Southborough Summer Nights Aug. 25 at Neary School. A fall road race is currently being organized by Fire Lt. Chris Dans. 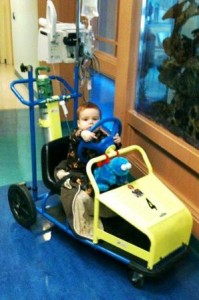