Marlborough – For high school football teams, the annual Thanksgiving game against their longtime rivals is one of the, if not the biggest, games of the season. For the team’s seniors, many of whom will be hanging up the cleats after the game, it can be especially poignant.

But as every football player knows, the game is not important to just them – it’s also exciting for their fans, including of course, their families. In Marlborough, Jackie and Chip Plank, whose son Cameron is a senior, came up with a fun way this year to honor the team’s seniors.

Jackie explained that in Stonington, Conn., where her brothers’ live, wooden life-size cutouts of players are displayed each year around the time of the Thanksgiving game. Each senior poses next to a cutout that has their number on it and then signs the back of it. The tradition is then continued each year, creating a lasting legacy of sorts to the school’s teams.

“My sister-in-law took the photo of the cutouts from Connecticut and emailed them to us.
We traced [Cameron’s] outline on butcher paper and tweaked the sketch,” Jackie said. “Then my husband, Chip, traced and cut out enough cutouts to cover our senior players.”

Chip then sanded the cutouts and started painting them, with the help of his wife and Lorri and Peter Keenan, whose son Andrew, is also a senior.

Once the cutouts were finished they were displayed along Bolton Street on the land between the high school and the Marlborough Police Station.

“Chief [Mark] Leonard was nice enough to let us put them up there,” Jackie said.

The cutouts will be displayed throughout the weekend.

“We hope the team will continue this throughout the years,” Jackie said.

The project was funded in part by the school’s sports boosters’ team.

Marlborough is due to play rival longtime rival Hudson High School at the Morgan Bowl Field in Hudson Thanksgiving morning. 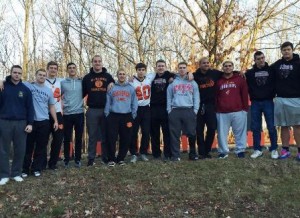 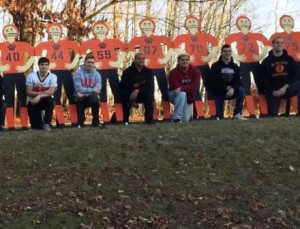 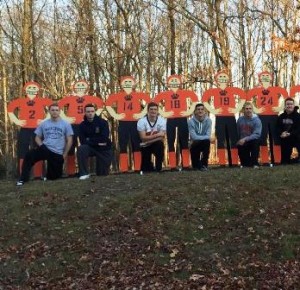