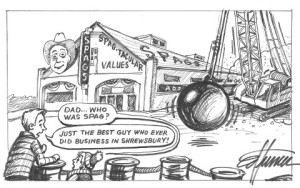 Shrewsbury – For decades, Anthony “Spag” Borgatti was not just the proprietor of his namesake store on Route 9 in Shrewsbury, he was a much beloved member of the community whose generosity touched scores of local families and organizations.  Starting with a $35 loan from his mother, following his graduation from Shrewsbury High School, Borgatti ultimately grew Spag’s to a juggernaut with $90 million in sales and 500 employees.

Borgatti’s reputation as a brilliant retailer and philanthropist carried far beyond the borders of Shrewsbury to many corners of the United States. Spag’s was considered a must-stop destination for visitors coming to Shrewsbury from far and wide.  After his passing in 1996, his family ultimately sold the business in 2004. Since that time, several other businesses operated there under various owners until it was bought by Grossman Development Group in 2014.