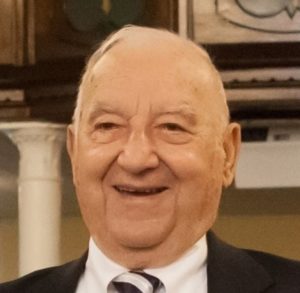 Shrewsbury – Ralph E. Dumphy, 84, of Shrewsbury, died Monday, Sept. 19, 2016 at the Christopher House in Worcester, surrounded by his loving family.

He was born and raised in Worcester, son of the late Thomas and Ora (Burpee) Dumphy. He graduated from Saint John’s High School in 1950. He later continued his education at Worcester State College, receiving both his Bachelor’s and Master’s degrees in Education.

Like most men his age, Ralph served in the United States Army and honorably served his country during the Korean Conflict. Ralph then met Patricia A. Gannon, whom he married July 4, 1956 in Saint Margaret Mary’s Church in Worcester. They celebrated 60 wonderful years of marriage this past summer.

Ralph was an educator most of his life and enjoyed being a mathematics teacher for over 25 years with the Shrewsbury School System until he retired.

Ralph was a hard worker who never gave up; even in his retirement he found time to work with Catholic Charities and the Guild of Saint Agnes, and volunteered at the soup kitchen and food panty at St. John’s Church in Worcester. He also had a few hobbies, including being a “foodie” most of his life. He enjoyed cooking everything and anything for his family and friends and was a collector of Lionel Trains. Most of all, he cherished the time spent with his family and he found tremendous joy in his many grandchildren and great-grandchildren.

The Dumphy family wishes to extend their gratitude to the entire staff at Christopher House, Family Tree Home Care, Hospice of Jewish Health Care, and the Sisters of Mercy for their compassionate care of Ralph and their family during his illness.

Memorial contributions can be made to Saint John’s Food for the Poor Program, 44 Temple St., Worcester, MA 01604.