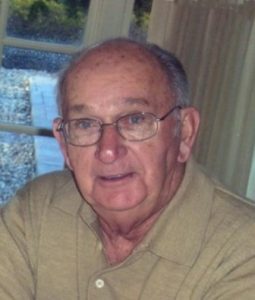 South Chatham – George M. DiTerlizzi, 88, of South Chatham, formerly of Villa Road in Shrewsbury, passed away with his loved ones at his side Wednesday, April 5, 2017.

George is survived by his wife, Lena; his two children, Maurice DiTerlizzi in West Yarmouth and Paula J. Donahue and her husband Stephen of Shrewsbury; two granddaughters, Brianna “Doll” and Devin “Pal” Donahue; a sister-in-law, Rose DiTerlizzi of Shrewsbury; and many nieces, nephews, and extended family members. Two brothers, Michael and Jerry DiTerlizzi, and a sister, Congetta “Connie” DiLeo, all predeceased him.

George was born May 6, 1928 in Shrewsbury, one of four children of Italian immigrants Mauro and Lucia (Ambrosino) DiTerlizzi. Raised and educated in Shrewsbury, George and Lena lived doors from each other and on May 5, 1951, at St Anne’s Church, George and Pasqualina “Lena” Cozzoli began their married life of love and devotion. They settled back in the neighborhood where they grew up, with relatives and friends near. Over the next 66 years, the families of Plainfield Ave and Villa Rd grew close knit, enjoying gatherings, holidays and special occasions together.

During his employed years, George worked as a foreman alongside his brothers and friends for Joseph Tonelli & Sons Construction Company before retiring.

In 1990, with a love for fishing and the ocean, George chose to move to Cape Cod where he and Lena have lived ever since.

Besides his wife, children, and granddaughters whom he devoted his life to and found so much enjoyment and love, he also cherished Chatham and the quaint family living on Cape Cod. The capability to fish and dig for clams, quahogs, and oysters with Lena by his side made life simple and enjoyable. Some of George’s greatest moments in life were during the many fishing trips off Monomoy with his son, brothers, relatives, and friends.

When not home watching cowboy films, helping a neighbor, playing cards or working with his tools, George could be found with friends at Larry’s PX talking sports and fish over a cup of coffee.

His funeral Mass was celebrated April 10 in the Mercadante Funeral Home & Chapel of Worcester, with burial at Mountain View Cemetery.