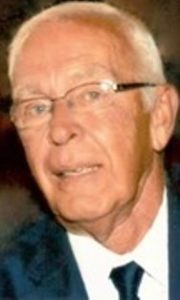 He leaves his wife of 53 years, Janet D. (Belanger) Baker; a son, Christopher Baker of Woodstock, Conn.; two daughters, Rebecca Baker of Shrewsbury and Nicole Densen and her husband Brian of Webster; a brother, Richard Baker of Florida; six grandchildren, Justin, Taylor, Derek, Anthony, Rhea, Lana,; a son-in-law, Donald Bonner of Leicester; and several nieces and nephews. He was predeceased by a daughter, Debra Bonner.

Born in Worcester, he was the son of Harold & Louise (Belliveau) Baker.

Mr. Baker was a fireman for 24 years on the Shrewsbury Fire Department, and he also worked for DB Tile Co. in Leicester.

He was a graduate of St. Peter’s High School in Worcester and proudly served his country in the Marine Corps.

He was a member of St. Pius X Church in Leicester. He loved camping and spending time with his family.

The family would like to thank Beacon Hospice for their kind care that was given to Donald.