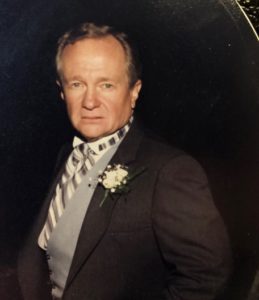 North Grafton – Herbert Walters Jr. died July 3, 2018 at home due to complications related to cancer. Herb was surrounded by love and his family.

He will be lovingly remembered by his daughters, Amelia and Martha Walters and their partners Collin Tierney and Thomas DiGiuseppe; his nephew, Sergio Ramos and his wife Loree Ramos of Portland, Ore.; his sister-in-law, Margaret Peltola and her husband Martti Peltola of Westminster; and his sister-in-law, Evelyn O’Brien of Worcester and her sons Bernie and Brendan O’Brien with his husband Elliot Field. He was preceded in death by his spouse, Marion Walters, June 3, 2018; his sister, Martha Ramos, May 10, 2018; his sister, Betty Walters, in 1984; his sister, Mabel Beaber, in 1955; and his parents in 1955.

Born in Burlington, Wash., Herb was the son of Emelia (Reusche) and Herbert Walters.

Herb lived an eventful life, serving in the U.S. Army as a medic and a paratrooper and making his way to the East Coast, where he graduated from the University of Connecticut in 1976.
He worked as a dedicated physical therapist for nearly 40 years at Rutland Heights Hospital, at his own PT business, and other places in the Worcester County.

Herb was a loving and devoted family man who constantly put his family first. He was also a skilled handyman and avid reader, with a passion for history, the Hebrew language, the outdoors, and woodworking.

In lieu of flowers, please make donations in his name to Veterans Inc., 69 Grove St., Worcester, MA 01605 or online at www.veteransinc.org.

Herb’s family and friends gathered for his funeral service July 9 at Roney Funeral Home of North Grafton, and he was then laid to rest at Pine Grove Cemetery in Grafton.

A Book of Memories to share a memory of Herb is available online at www.RoneyFuneralHome.com