Marlborough – A mother’s worst nightmare – her child in danger, with no way to reach him. This is Deborah Harper’s reality as she copes with the mental illness that has robbed her son, Jared, of a promising future. Harper has witnessed her bright, sensitive, creative child slide into a tunnel of confusion and heartbreaking situations because of schizophrenia.

The most devastating happened this fall when Jared, now 27, threatened Harper and her sister during a psychotic episode. There was no choice but to make a 911 call and flee the home. A team of 50 state police, local police, and heavily armed Special Forces members surrounded her home.

“After hours of pleading with Jared to come out, the police used a battering ram to enter his bedroom, destroying the door and breaking a cherished acoustic guitar that he played for hours a day,” recalled Harper.

She was forced to watch as he was led away in handcuffs, ultimately charged with assault and threatening to commit murder. Jared was confined to jail for almost two months while they awaited a dangerousness hearing, then underwent a 30-day forensic evaluation. He was discharged back to his group home in Worcester under probationary terms. He wears a GPS ankle bracelet and must appear in court for several more months.

“The grief and feelings of helplessness are indescribable,” Harper said. “The mentally ill are so drastically mistreated and misunderstood. There are no beds available in genuine rehab places because of the opioid crisis. The only place left is correctional facilities.”

Harper wants to use her expertise in the arts and media to give the mentally ill a creative outlet. She owned a successful advertising agency and has taught design and visual communications for almost three decades at Assabet Valley Regional Technical High School in Marlborough. She feels that many of those suffering from mental illness will be able to better communicate through their creative side. With training, some may even be able to find employment or at least use the skills learned to lead an independent life.

Her business proposal is to outfit a small studio with computers, software licenses, printers, furniture and digital SLR cameras. She plans to raise at least $30,000 as seed money for the project through a fundraiser she dubbed Cross Roads.

“I designed the logo based on my son – surrounded by music and at a crossroad,” Harper explained. “The character is optimistic and holding a bass guitar. I want to create a place where they can go on a regular basis and learn to create art, music and communication through digital tools and software.

“I do understand that this is a big undertaking, but it is bringing me to life. It has fueled something inside of me that was buried beneath the rubble of disaster. I have always felt that love isn’t something you say, it is something you do. Now that I am doing something besides worrying and showing up to court every other month, I am able to see beyond my pain and constant fear,” Harper said.

The Cross Roads fundraiser will be held at the Hudson Elks, 99 Park St., Saturday, April 6, from 7 to 10 p.m. For a donation of $20, there will be live music provided by Playback, raffles, prizes and games. Harper is asking for local businesses to be Table Sponsors and donate $300; other sponsor levels are Patron, for a donation of $150, and Friend, for a donation of $100. She is also asking for themed gift baskets that could be used as raffle prizes.

“I believe that I have to continue sharing my story so that I can help others who cannot tell theirs,” she added.

She can be reached at [email protected] to learn more about Cross Roads. 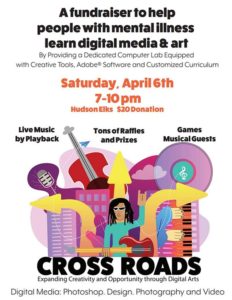