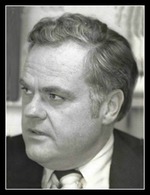 Born to Lester and Helen Moffatt in Malvern, Pa., he attended Tufts University on an NROTC scholarship before serving as a commissioned officer in the United States Navy. Following his naval service, he embarked on a career as a Professional Engineer and executive with Gillette, The University of Connecticut, Star Markets, Tufts University, The Museum of Fine Arts Boston, Berry Construction, The Harvard Business School, and The Harvard Graduate School of Education.

During his professional career, he earned a Master of Business Administration from Babson College and an honorary Doctor of Engineering Technology from Wentworth Institute of Technology.

An avid pilot, sailor, and golfer, he was a longtime member of Brae Burn Country Club, the Aircraft Owners and Pilots Association, Quiet Birdmen, and Toastmasters International. He was also very active in youth sports, as both a coach and an official with Newton Youth Soccer, Newton Little League Baseball, and Newton Senior Youth Baseball. Additionally, he further served the community as a Corporator at New England Deaconess Hospital and Trustee and Treasurer at the National Braille Press.

At his request, there will be no services, but donations to Parkinson’s research are appreciated: Donation Processing, The Michael J. Fox Foundation, P.O. Box 5014, Hagerstown, MD 21741-5014 or www.michaeljfox.org.