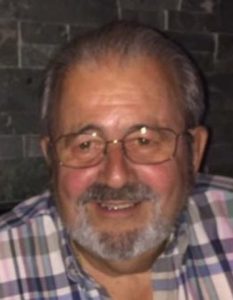 Northborough – James H. Trudeau, 70, of Northborough, passed away unexpectedly at home June 1, 2019 one day short of his 71st birthday. He leaves his beloved companion of over 16 years, Paula A. Congdon.

Jim was born in Marlborough and raised in Hudson, a son of the late Harvey A. and Angelina (Ziane) Trudeau. He graduated from Hudson High School in the class of 1966 and subsequently enlisted in the United States Air Force, honorably serving from June 30, 1967 until June 29, 1971, while earning the rank of Staff Sergeant.

During his service Jim was trained as a Jet Engine Mechanic and worked as the B- 52 crew chief in Guam. He was awarded with several commendations including the Badge of Strategic Air Command and Defensor Vindex. Following his honorable discharge from the United States Air Force, Jim began working for the Town of Hudson Department of Public Works as an auto/truck mechanic from 1972 until 1985. Jim later worked for REG Interests as a maintenance manager and personal assistant to the president of the company. He also worked for NAPA Auto Parts as a sales representative who was responsible for the preparation of start-up companies. In 1990 Jim returned to work with the Town of Hudson to work for the Hudson Housing Authority as a maintenance mechanic, eventually retiring in 1998.

In Jim’s earlier years, he loved stock car racing. Known as “Diamond Jim,” he proudly owned and raced his #12 1968 Firebird street stock out of Westborough Speedway with a pit crew of friends for many years.

Throughout his life Jim had a strong passion for motorcycles. He especially enjoyed his annual trips to Weirs Beach in New Hampshire with his dear friends to attend Laconia Bike week. He was an avid outdoorsman and enjoyed watersports, especially on his many visits to Brown’s Cove in Lake Winnipesaukee. Jim was also an active golfer and a member of the Juniper Hill Golf League.

One of Jim’s greatest joys was watching his grandchildren participating in the activities they loved. Whether it was dance recitals, soccer, deck hockey, softball, or basketball he was always there to cheer them on.

Amongst his many heartbroken survivors he leaves behind his beloved companion, Paula A. Congdon and her family, Heather M. Lippert and her former spouse Keith A. Lippert, Jeffrey Congdon and his wife Judith A. Congdon, Kendra Lippert, Cole Lippert, Lila Rice and Owen Rice; his sister Janice Massarelli; and his two nieces, Lynn Massarelli and Beth Smith.

Relatives and friends are invited to a period of calling hours Thursday, June 6, from 4-7 p.m., at TIGHE HAMILTON REGIONAL FUNERAL HOME, 50 Central St., Hudson. A Mass of Christian Burial will be celebrated Friday, June 7, at 10 a.m., at Saint Bernadette Parish, 266 Main St., Northborough, followed by interment in Howard Street Cemetery in Northborough.