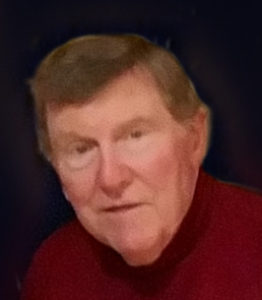 Mike was born and raised in Auburn, New York, son of the late James T. and Pauline (Lynah) Monahan. He graduated from Mount Carmel High School and Alfred University where he graduated with a Bachelor’s of Fine Arts Degree.

He married Virginia J. May in 1963, they later moved to Shrewsbury in 1972, where they lived and raised their children. He served his country proudly as a Captain in the United States Army during the Vietnam War.

Michael held the position of Director of Media Communications for Boston Edison, now known as Eversource, for over 25 years before he retired in 2003. In his retirement he was an avid golfer. He was a game he truly loved. When his children were younger, he volunteered with the Boy Scouts and coached baseball. In later years, he would go to as many events as he could to see his four grandchildren.

Michael was a long time member of Saint Mary’s Parish where he served active as a lector and usher at the 7:30 am Sunday Mass.

The Monahan family would like to send a special thank you to the Staff of Shrewsbury Nursing Home and the JHC Hospice Staff for all the compassionate care that was given to Michael during his illness.

Relatives and friends are invited to visit with Michael’s family on Friday January 10, 2020 from 4-7 pm in the BRITTON-SHREWSBURY FUNERAL HOME, 648 Main Street, Shrewsbury. His funeral will be on Saturday, January 11, 2020, from the funeral home with a funeral Mass at 10:00 am at St. Mary’s Church, 640 Main Street, Shrewsbury. Burial with military honors will take place in Mountain View Cemetery, Shrewsbury.

Memorial donations may be made to St. Jude Children Research Hospital (www.stjude.org/donate).