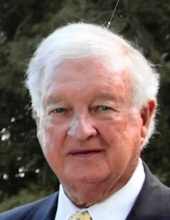 Shrewsbury – John A. “Jack” Williams, Jr., of Shrewsbury, passed peacefully at home on Tuesday, May 26, 2020, surrounded by his wife and family. Jack adored his beloved wife Barbara who in his words, “is the heart and soul of our family.” Jack was born in Worcester, son of the late John and Margaret (Carney) Williams.

Jack graduated from St. Stephens High School and the College of the Holy Cross in 1956 with a BS in Business Administration and a commission in the U.S. Navy Reserve. He married the love of his life Barbara in 1956.

Jack served 7 years on active duty with the office of Navy Intelligence in Operational and Management in the U.S., Far East and South America where he was a Commanding Officer for the Naval Investigative Office for Central and South America, stationed in Panama. In Korea, Jack served as a member of a highly secure intelligence system, formerly aboard the USS Pueblo captured by North Korea. Jack was selected to the elite briefing team of the United Nations in Korea to brief flag officers, intelligence heads and Congress. He was a Navy officer in charge of the Reserve Intelligence Unit in Worcester and the U.S. Submarine Base, New London, CT.

Throughout his years Jack was the recipient of numerous awards and citations. He retired as a Commander in 1981 after 23 years of service. He was employed by a major pharmaceutical company where he introduced the first oral polio vaccine in Central MA and Shrewsbury, with the aid of the Public Health Dept. Later, Jack was employed by the U.S. Treasury Department Savings Bond Division as the Director in Manhattan and then the New York State Director.

He moved his family to MA to become the District Director of New England in Boston, retiring after 30 years to receive the Treasury Gallatin Award.

Jack’s life was devoted to his wife, children and grandchildren. He was a true New England sports fan but nothing gave him more joy than seeing his grandchildren year after year on a court or field. He was generous and kind and his work ethic was a great example to his family. He was an avid storyteller who always enjoyed entertaining family and friends. Barbara and Jack loved the ocean and enjoyed annual family trips to Cape Cod. They enjoyed over 20 winters in Florida and traveled to Ireland, Italy, Hawaii and cruised to Panama, Alaska and several Caribbean islands.

Family and friends will honor and remember Jack’s life by gathering for calling hours at the Chiampa Funeral Home, Sumner House, 5 Church Road, On the Common, Shrewsbury on Friday, May 29, 2020 from 5-7 P.M. A mass of Christian burial will be held on Saturday, May 30, 2020 at 11 A.M. at St. Mary’s Church, 640 Main St., Shrewsbury. Burial will follow at Mountain View Cemetery, Shrewsbury.

In lieu of flowers, expressions of sympathy in Jack’s name may be made to the Military Veterans Association, 59 South Street, Shrewsbury, MA.