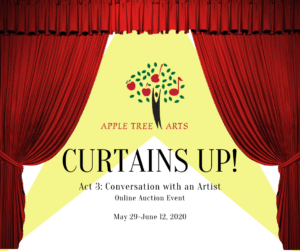 Grafton – Apple Tree Arts has incorporated a mission-related theme into their online auction which launched Friday, May 29. “Curtains Up! Act 3: Conversation with An Artist” is an opportunity for regional, national and international networks to support Apple Tree Arts, a nonprofit music and performing arts education organization, by bidding on conversations with artists, gift certificates and packages donated by individuals and businesses and by donating to a newly-established scholarship fund. The auction closes at 6 p.m. Friday, June 12.  https://charityauction.bid/appletreearts

This is an excellent way for anyone interested in music, theatre, film and/or TV to have a conversation with musicians, performers and other professionals who are working in music and/or performing arts. The “artists,” who live coast-to-coast in the U.S. and Ireland, have agreed to a half-hour conversation with the winning bidders. Whether that’s a phone call, through Zoom or another option, will be decided by the winning bidder and artist (facilitated by Apple Tree Arts).

Is there a recent college grad, teenager, family member or friend who would benefit or appreciate one of these conversations? Can’t figure out what to get for Father’s Day? Make it an early gift and let dad choose who he would like to converse with.

Watch for daily social media posts and information highlighting participating artists and their work as well as shout outs to auction donors. Bid for yourself, a family member or friend or make it a family conversation. As a bidder, you will support Apple Tree Arts while providing a unique opportunity that may change someone’s life!

Fife and drum corps to hold celebration at Wayside Inn