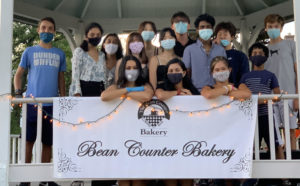 Shrewsbury – Nearly 100 people came out to attend an Open Mic Night Aug. 1 on the Shrewsbury Town Common. The event, organized by Deeptha Ganesh and Aditi Venkateswaran, two rising juniors at Shrewsbury High School, raised $770 in donations for the National Association for the Advancement of Colored People (NAACP) and the World Health Organization (WHO).

“In the midst of a global pandemic and immense calls for justice and reform across the United States, we felt completely helpless,” Ganesh said. “We decided that we needed to find a way to help, and began the process of planning Open Mic Night.”

Beth Casavant, chair of the Shrewsbury Board of Selectmen, first welcomed everyone to the event before a series of performances were held.

“There was a wide variety of songs, ranging from pop songs to hard rock to 60s jazz to Bollywood music: there truly was something for everyone! The emcees, Liam Reardon and Aarshiya Sachdeva, entertained the crowd with their witty banter and jokes in between acts,” Ganesh said.

In accordance with health guidelines, masks and social distancing were mandated. Additionally, our team of volunteers unfailingly sanitized the microphones, mic stands, and chairs in between each and every act. After the planned segment of the program, the floor was opened up to the public. Members of the audience who wanted to perform were able to come up to the stage and share their talents with the crowd.

Raffle tickets were sold for $2 each, with the three winners receiving either six cupcakes from the Bean Counter or a $25 gift certificate from Lalajava. Ilustre Party Rentals donated several tables that were used to set up an art display and stations to collect donations.