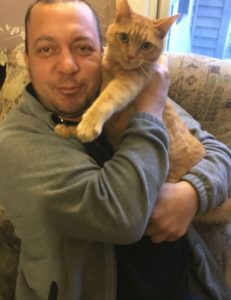 Marlborough – Michael B. Aponte, 53 of Marlboro passed away suddenly on Thursday, September 17, 2020 in Winthrop, MA.

Michael leaves his mother Linda Aponte, his sister Lisa Aponte, his nieces Andie LeBeau, Ashley Aponte, Stephanie Babin, as well as his great niece Aubrey Rose Aponte or Midget as he called her, and his significant other Lori Stankis, as well as many loving cousins. He was predeceased by his father Benjamin Aponte and sister Theresa Aponte.

Michael graduated from Hudson High School, Class of ’87 and went on to become a Chef. He has worked all across New England from New Hampshire down to Massachusetts.

Over the years he has owned many restaurants including Michaels Oceanfront in Hampton Beach. He even won Second place at the Portsmith New Hampshire Chowder Fest. From there he went on to be a Chef for Live Nation, Xfinity Center, Blue Hill Pavilion, and all venues throughout Boston.

In his free time he enjoyed being with family and his fur children, River, Bryann, Nicky, and Cali. He was a lifelong supporter of the Steelers and being at the ocean.

Calling Hours will be held on Tuesday, September 22, 2020 from 5-7 p.m. in the Short & Rowe Funeral Home, 95 W. Main Street, Marlborough, MA. Following cremation, burial will be private. We are asking that anyone attending his services please wear any concert t-shirt or sports shirt to honor his love and devotion to music and sports.