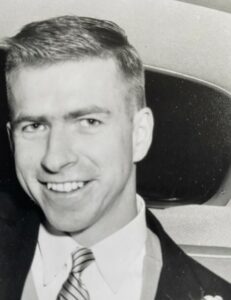 Marlborough – Harold F. Parker, 88, of Marlborough, died on July 26, 2021, in Marlborough Hospital after a long illness.

Harold was born in Boston, the son of the late Harold M and Alice P. (O’Brien) Parker. He grew up on Warren Street in Watertown, where he attended Watertown schools.

He enlisted in the U.S. Army and served in the 5th Signal Company, 5th Infantry Division and served from Dec. 24, 1952, and was Honorably Discharged on Dec. 8, 1955. Over half that time was spent stationed in Germany. While he was in the U.S. Army, he also traveled to the Netherlands, Belgium, England, France, Switzerland, Austria, Italy, and Scotland.

Harold was employed by Raytheon as an electrical engineer working in the Missile System Division for 38 years, retiring in 1993. He was a devout Catholic and attended Immaculate Conception Parish in Marlborough. In his spare time, he enjoyed wood carving and building model airplanes.

He was predeceased by his wife of 54 years, Marjorie Parker, who died in 2012.

A funeral Mass will be celebrated on Monday, Aug. 2, at 9 a.m., in the Immaculate Conception Church, 11 Prospect St., Marlborough. Burial will follow in St. Patrick Cemetery, Watertown.