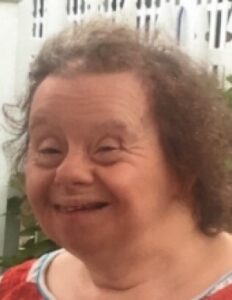 Shrewsbury – Terry F. Erickson, 62, formerly of Shrewsbury, passed away peacefully on July 26, 2021, surrounded by her loving family. Born in Shrewsbury to Lennart and Mary F. (Kearns) Erickson, Terry attended Our Lady of Mercy School in Worcester for her entire life.

A parishioner at St. Mary’s Church in Shrewsbury for many years, Terry was an accomplished Catholic woman, rising up to the role of Eucharistic minister. She became a skilled kitchen worker and “domestic goddess” through Mercy Centre’s Sheltered Workshop, with the help of her friend and work coach, Wayne, who has been known to have saved her life.

After the passing of her mother and father (who was also her bowling partner), Terry moved to Worcester to reside with her sister, Pat. She then became part of the extended Ritchie family, where she was well loved and cared for, for many years. With her declining health and increasing needs, she moved to a Seven Hills group home and most recently to a beautiful home in Paxton.

Her family is very grateful to Terry’s many caregivers over the years, in particular the Olsen family, along with Sheila and Brian and family, all of whom have learned the value of loving and caring for those with special needs. The family hopes that all who knew Terry, as well as those who read this, take some time out of their day to do something special for someone who cannot do for themselves.

Relatives and friends are respectfully invited to attend a visitation period on Friday, July 30, from 10-11:30 a.m., at the Chiampa Funeral Home – 5 Church Road, On the Common, Shrewsbury Center. A funeral Mass will follow at 12 p.m. at St. Mary’s Church, 640 Main St., Shrewsbury. Interment will follow at Mountain View Cemetery in Shrewsbury.