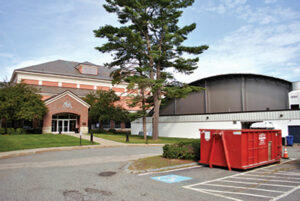 SOUTHBOROUGH/HUDSON – A chance conversation at a Hudson bar in the early 1970s led a dad to start his young son in hockey.

Little did anyone know at the time, but that encounter was a veritable passing of the torch from one former Olympian and NHL player to a future one.

“‘How old is your son?’ Tommy Williams asked my dad,” two-time Stanley Cup winner Scott Young recently told the Community Advocate. “I was five and he recommended that I start playing hockey and he gave me a stick.”

“My dad said, ‘Let’s give it a try,’ and so we went to Marlborough’s Navin Rink,” Young continued.

After that seed was planted by Williams, a former Boston Bruins fan favorite who won a gold medal with Team USA in 1960, Young’s hockey growth never faded. Originally from Clinton, he climbed aboard a St. Mark’s School squad in Southborough and his hockey elevator went up fast.

In the early to mid-1980s, it was a glorious time for hockey at the private prep school, with Young and the Brown brothers, Doug and Greg, helping push the envelope to get to the upper echelons of the sport.

Young and the younger of the two Brown brothers, Greg, played for Team USA in the 1988 and 1992 Olympics. Young was also on the roster when the U.S. won the silver medal at the 2002 Olympics. He earned gold at the 1996 World Cup of Hockey and attained that Holy Grail of the sport by being part of two Stanley Cup winning teams — the 1991 Pittsburgh Penguins and the 1996 Colorado Avalanche.

Doug Brown is a two-time Stanley Cup champion, winning with the Detroit Red Wings in 1997 and 1998. However, he did not play in the Olympics.

All three played at a high level collegiately in the mid-1980s, with the Brown brothers at Boston College and Young at Boston University.

“[The] Stanley Cup is No. 1 for me,” Young said while summing up his top moments. “Bringing the Cup back to Clinton and the World Cup win, I put both at No. 2. And winning the Olympic silver medal playing for Herb Brooks at Salt Lake City in 2002 is No. 3.”

Indeed, Young was proud to give the Clinton community their moments with the Cup.

“It made it even more special to me to watch everybody else enjoy it,” he added about the NHL tradition of each player having his day with one of the world’s most famous trophies.

Nowadays, Young is the director of player development for the Penguins.

“It’s all about helping players make it to the NHL level or helping players at whatever age level,” he said. “There’s really not many things I haven’t seen in hockey — Olympic teams, national teams, World Cups, BU. It’s so satisfying helping out and developing relationships with players and then watching them skate their first shift in the NHL or when they’re the only guy in the warmups taking that first pregame lap. I get chills for these players.”

As for Young’s super quick assessment of the Browns — “Excellent skating, edge work and just strong on their skates. They had that hockey, bow-legged look. Greg, a good all-around defenseman and player. Doug, very smart.”

It certainly helped the Browns that both of their parents worked at St. Mark’s. They lived 100 yards from the rink.

“It was a great place to grow up, a perfect spot if you love skating,” said Greg, who played 94 NHL games (4 goals, 14 assists) in parts of four seasons. “And fortunately, hockey was very strong all around in the area.

“Doug had to change his game,” said Greg, who spent three years as a New York Rangers assistant coach starting in 2018 after many years as an assistant at BC. He is now the head coach of the Dubuque Fighting Saints of the United States Hockey League.

“In high school and college, he had a lot of creativity and knew how to generate offense at those levels,” Greg continued. “When he got to the NHL, those jobs were taken. He did a great job adapting his game, becoming a penalty killer, a bit of a checker. He understood what they were trying to get done.”

As for his own skill set?

“I wasn’t a high-end offensive player or a big shutdown defensive player, but somewhere in the middle,” Greg said. “A bit of a ‘tweener. I was able to move the puck well and break out of the zone and hopefully contribute offensively when I had the opportunity.”

Among Greg’s highlights were his three years in college and the Olympics.

“We had great teams at BC,” he said. “Coaching has been another great experience. I’m getting my first crack at being a head coach after learning from a host of fantastic coaches like Jerry York, Dave Quinn, Mike Cavanaugh and Lindy Ruff.”

Since leaving the NHL, Doug Brown has been involved in the business world.

It’s been more than 30 years since Scott Young and Doug and Greg Brown started making hockey vibrations in Southborough. In some ways, those days were the dark ages when the rink at St. Mark’s had a roof but was open on the sides. It was not what you would call temperature controlled.

“It was soooo cold,” Greg said. “And twice a week, we’d practice at night. We’d wear hats under our helmets and put Vaseline on our ears.”