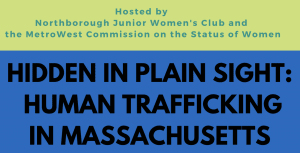 NORTHBOROUGH – Northborough Chief of Police William Lyver got a wakeup call to the problem of human trafficking several years ago.

The Northborough Police Department was working with the Worcester County District Attorney’s Office. A task force of Northborough, Worcester and Fitchburg officers were targeting human trafficking in motels.

The police set up a sting operation, advertising underage girls.

“I think throughout the course of the night, there were 18 arrests,” Lyver said during a webinar on Sept. 9. “Most of them were Northborough. The alarm bells went off.”

The webinar was called “Hidden in Plain Sight: Human Trafficking in Massachusetts.” It was hosted by the Northborough Junior Women’s Club and the MetroWest Commission on the Status of Women.

Lyver was joined by Senator Harriette Chandler, whose district includes part of Northborough, and Rachel Matos of Voices Against Violence in Framingham. Nikki Bell, the founder and CEO of Living in Freedom Together, also joined the event.

White men predominantly are the ones who buy victims of sexual exploitation, Bell said. Often, perpetrators earn over $100,000 a year and are married, she said.

In terms of who is being bought, Bell said it’s predominantly women and girls. People of color and LGBTQIA+ youth who are aging out of systems are often particularly vulnerable.

Bell said she spent most of her teen and adult life in systems of prostitution.

“I was arrested over 30 times, and never once did anyone say to me, ‘Is anyone making you do this? Do you want to stop? Would you like to be connected to resources?’” Bell said.

She said that the response she experienced was more often to place her hands behind her back and get in the back of the police car.

“More often than not, the buyers were told to go home,” Bell said.

If police believe trafficking is occurring in either a home or a motel, Lyver said, police start by making a more obvious presence in the area.

“Make the area uncomfortable,” he said.

The police have also reached out to businesses surrounding motels with information on indicators of trafficking.

Lyver said the department has shifted from a traditional police role of targeting prostitution to one that attacks the demand side and arrests the customers.

The idea, he said, is to then get survivors in contact with services.

In some cases, Lyver said the victims are dropped off in a motel room and left with little. Their IDs are taken from them.

Every night, Northborough officers on the 4 p.m. to 12 a.m. and midnight shifts check the registers at the motels to see who is registered.

Sometimes, police run the names through databases, seeing if anyone has a connection to prostitution or if they have active warrants on prostitution or child endangerment charges.

In those cases, the officers make arrests.

“Basically, trying to make it so that word gets around that this is not the place that you want to do this,” Lyver said.

“It’s not stopping it,” he noted. “It’s kind of kicking the can down the road to another town.”

But that’s what happened to Northborough after cities like Worcester and Framingham began cracking down, he said.

Children’s book authors bring joy of reading to those in need (communityadvocate.com)