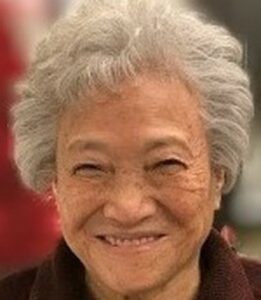 Northborough – Lanzhi Li was born on September 2nd, 1936 in a small town called Yancheng in China. She is survived by her only daughter Wei Huang, son in-law Peter Gaudet, and grandson Nathaniel Gaudet.

Lanzhi had a difficult childhood due to her father serving in the army and being transferred to Taiwan causing her to have no contact with him for fifty years, Lanzhi was brought up by her mother alone, who worked for a sewing factory to support the family.

As a young girl, she worked hard, managed to go to college, and became one of the few female senior mechanical engineers at that time. She met Linshui Huang whom she thought was the most loving, caring, and knowledgeable gentleman in the world. He was at first her work mentor and later became her husband and they were married in February of 1969. Together they managed to survive some of the most difficult years in China.

Lanzhi was very intelligent, active, optimistic and kind-hearted and faced each day with a smile. She loved to travel and managed to explore every corner of China with friends and family. After retiring in China, she kept herself busy in group activities such as dancing, singing, knitting, and sewing. Even after her beloved husband passed in April 2007, she was able to maintain her active lifestyle. In 2010, she moved to the United States to be with her daughter and son in-law and to welcome her grandson’s arrival. She gave all her love and provided all she could to the new baby up until the time of her passing.

In her later years, she enjoyed living independently at her own apartment. With her outgoing personality, she was able to make new friends with other Chinese seniors in the same community. She stayed busy learning English, singing, crafting, crocheting, knitting and doing puzzles, but enjoyed making delicious meals for her family most of all.

While Lanzhi’s passing was shocking and has left us heartbroken we know she will always be looking down upon us, her bright smile guiding our way.

A time to visit with Lanzhi’s family will take place between the hours of 10am and Noontime on Saturday, October 23, at Hays Funeral Home, 56 Main Street, Northborough. The wearing of masks is recommended for all.

To leave a condolence for Lanzhi’s family, please visit www.HaysFuneralHome.com.