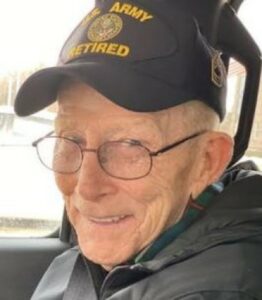 Grafton – Danny Warner, a veteran of the Vietnam War and a longtime resident of Grafton, passed away on December 8, 2021 after a valiant battle against cancer. He was 79.

Danny was born in Warsaw, Indiana to Calvin Warner and Betty (Himes) Warner on October 7, 1942. He spent 24 years serving our country through a tour of duty in Vietnam and two tours of duty in Germany as a calvary scout. He later became a recruiter working out of Boston and retired with the rank of Master Sergeant.

The U.S. Army recognized Danny for his honorable service with multiple commendations and awards throughout his career, most notably, two Bronze Stars, the Vietnam Cross of Gallantry, two Meritorious Service Medals, the Army Commendation Medal, and the National Defense Medal, among other honors.

Danny met his wife Francina (Stern) Warner during one of his tours of duty in Germany, as they both were working at the US Army hospital at that time. They married in 1968 and traveled from place to place as the Army commanded, finally settling in Massachusetts and building their dream home in Grafton in the early 1980’s where they hosted many gatherings with their children and extended family. After retiring from the Army, Danny went on to serve in multiple roles at the US Postal Service in Clinton and Worcester.

Danny loved watching westerns and James Bond movies, cooking for family gatherings, watching the Red Sox and Patriots, and going to the casino with his wife Fran. He was a longtime member of St. James Parish in South Grafton, MA serving as a lector for many years. He was also a staunch supporter of veterans’ rights. Perhaps his greatest joy was forming a special bond with his grandchildren in their formative years by caring for them as babies and toddlers. He loved spending time with them, watching them grow, and going to their football, basketball, and lacrosse games, cheering loudly, and ringing the bell in the stands.

Danny was predeceased by his beloved wife of 52 years, Francina (Stern) Warner, as well as his parents Calvin and Betty (Himes) Warner, stepmother Rita (Richards) Warner, his brother John Warner, and his sister Penny (Warner) Zawacki.

All are welcome to gather with Danny’s family and friends Thursday, December 16th from 5pm to 8pm at Roney Funeral Home 152 Worcester Street N. Grafton, MA 01536. A Mass of Christian Burial will be celebrated at St. James Parish, 89 Main Street South Grafton, MA 01560 on Friday, December 17th at 10:00am.

Those who may wish to make a donation in Danny’s name may consider supporting veterans by donating to Home Base 125 Nashua Street, Suite 540, Boston, MA 02114.

A Book of Memories to share a special message with Danny’s family is available online at www.RoneyFuneralHome.com.