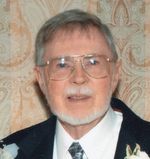 Born in Philadelphia, the son of William Lawrence Haith and Agnes Donohue Haith Thibeault, he grew up in Southbridge, graduated from Mary E. Wells High School and served in the U.S. Army from 1945 to 1946. He graduated from Clark University in 1954.

Mr. Haith was employed by General Electric in Schenectady, N.Y. until 1956. He later taught at North High School and Tantasqua High School, Paton School and Beal School, then continued a long public career as teacher of English at Burncoat Sr. High School, retiring in 1988.

He worked summers at Nature Training School in Holden as director of the summer camp in 1970, and as teacher of Ornithology, Meteorology, and Pond Life through the 1960s and 1970s. He was an avid hiker and camper, and also enjoyed traveling with his wife.

He leaves his daughters, Mary Ann Smith of Shrewsbury and Patricia Feijo and her husband James of Rhode Island; his son, William Lawrence Jr. D.O. and his wife Lisa of Biddeford, Maine; his five grandchildren, Sasha and Kayla Smith, and Sean, Michael and Angela Haith; and his dearest friend, Natalie Aspero.

A funeral Mass will be held Monday Dec. 19, at 11 a.m., in St. Mary's Church, 640 Main St., Shrewsbury. There are no calling hours. Burial with Military Honors will take place in Mountain View Cemetery of Shrewsbury following the Mass.

In lieu of flowers, donations may be made to the Saint Mary's Building Fund.