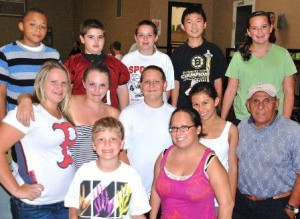 Westborough – For the 16th year, youth entering grades six through 10 are keeping busy with activities and field trips from late June through mid-August thanks to Hot Summer Nights (HSN), a program of Westborough Youth and Family Services (WYFS). Many activities are offered free, some with a minimal fee, and scholarships are available.

The program began the last day of school with an ice cream giveaway outside the Forbes Municipal Building (FMB), where the WYFS office is located. As it has done the past few years, the nearby Westborough Public Library distributed free books the same day to middle school students for their summer reading program. The concurrence of events was welcomed by John Badenhausen, director of WYFS.

?”The library director, Maureen Ambrasino, is focused on engaging young adults to reading at the library,” he said. “This is the first summer we'se cosponsoring events with the library. It's an evolving relationship.”

?A recent co-sponsored event at the library was Teen Movie Night, featuring a film selected by HSN participants. Another was a cooking class with food provided by the Friends of the Westborough Public Library.

?This summer's program coordinator is Lizzy Sricharoenchaikit, a 2008 Westborough High School graduate. Currently completing her senior year as a psychology major at American International College in Springfield, she plans to attend Le Cordon Bleu College of Culinary Arts in Boston.

?Sricharoenchaikit joined HSN with a helpful perspective; she participated in the program as a middle school student. She brought back to the program an activity she remembers as her favorite: tie-dying.

?Several activities proven to be favorites over the years also returned this summer, including the three-on-three basketball tournament held in the Gibbons Middle School gym. Teams of three to five players competed in the double-elimination tournament. About 30 players participated this year.

Another returning activity was “Xtreme Bowling,” two hours of fun at AMF Town and Country Bowling in Shrewsbury. Evenings dedicated to crafts, games, origami, yoga and dance were held at the FMB Auditorium.

This summer's first field trip was to historic Gloucester, where participants took along cameras and boarded a high-speed whale-watching vessel. It was the first time most of the HSN participants saw whales, Sricharoenchaikit said.

?”We saw lots of whales and got great pictures of them,” she said. “We had a really good time.”

?While most HSN activities take place in and around Westborough, bus trips to regional attractions are the program's most popular. Due to town budget cuts in 2010, WYFS could no longer afford bus rental fees, so the field trips were eliminated, Badenhausen said.

“Without the field trips, it significantly reduced participation level in all HSN events,” he explained. “So we made a concerted effort last year to do fundraising, which would include the bus trips.”

Field trips returned to the program last year and participation increased. Scheduled trips in August include Six Flags New England in Agawam, and Hampton Beach with a stop at Kimball Farm for ice cream.

As someone who took HSN trips when younger, Sricharoenchaikit understands why participants enjoy them.

“They get to have fun on their own – with adult supervision, but without their parents,” she said.