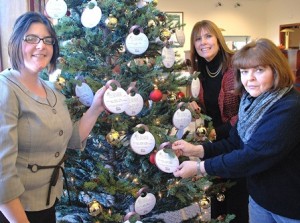 Northborough – It's beginning to look a lot like the holiday season with decorated trees displayed at storefronts. A uniquely decorated tree is once again attracting attention at the Northborough branch of Central One Federal Credit Union. The ornaments are tags on which gift requests are printed for seniors who otherwise might not be remembered with a present.

For about 12 years, the Northborough office of Home Instead Senior Care, in conjunction with the Northborough Council on Aging, has organized the “Be a Santa to a Senior” program. Initially, the holiday tree was set up at various retail stores. Over the past several years, it has been displayed at the credit union.

Laurie Bender, owner of the Northborough office of Home Instead, believes the tree found the ideal showplace.

“The bank assumes a lot of responsibility, and they make sure everything looks nice on a daily basis,” she said.

Bender also expressed gratitude for placards announcing the program, which are currently posted at local businesses including Lowe's Variety & Meat Shop and Dunkin” Donuts in Northborough.

Kate Shaw, who started as the Northborough branch manager at Central One last January, said her coworkers have prepared her for the annual program.

“They'se been doing the program here for several years and it has been very successful,” she said. “Central One wants to be involved in the community as much as we can, through the Senior Center and the schools. We feel community involvement is an important piece of our business.”

Although the program has faced a fluctuating economy over the years, Bender said the public has continued to respond enthusiastically.

“I thought we's have a lot of ornaments left on the tree because of the downturn in the economy four years ago,” she said. “But I was pleasantly surprised that people are still giving and doing good for others.”

Area residents are encouraged to visit Central One and choose a tag with a senior's gift request.

Kelly Burke, director of the Northborough Senior Center, said the requests vary, but are consistently simple to fulfill.

“It ranges anywhere from a box of candy to a three-headed electric shaver,” she said. “People ask for very basic items, such as sheets or towels, wooden spoons, a running suit, a pasta pot, sometimes a gift card to Target or Walmart. One woman asked for a backscratcher.”

Home Instead also provides stocking stuffers, an extra item to go with each gift.

“The stocking stuffers are fun, little treats that people who are really scrimping don's get for themselves,” Bender explained. “A lot of times, the people who come in for tags will bring back not only the pillow that was requested, but also a set of pillowcases.”

Burke has observed that many seniors are particularly thankful for the stocking stuffers, which they weren's expecting.

“People have been moved to tears because they are so appreciative,” Burke said. “It's that little kindness from a stranger that can make a big difference in someone's life. Although the particular gift may not have a huge monetary value, it means a lot to someone who's remembered.”

The gifts need to be brought to Central One at 148 Main St. in Northborough by Friday, Dec. 7. Volunteers are invited to a gift-wrapping party Tuesday, Dec. 11, from 3 to 5 p.m. at the Senior Center at 119 Bearfoot Road. Donations of wrapping paper would be appreciated. Volunteers can call the center beforehand at 508-393-5035.